June 19, 2019, Tokyo – The LL Project Production Committee (Amata K.K., VAP Inc.) has announced that the release date for VR title Last Labyrinth has been delayed to Fall 2019, while the TV commercial for said title and list of compatible VR hardware have both been added to the official homepage.

Previously announced to be available in Summer 2019, the estimated release date has been pushed further back in order to polish game quality. The VR title will be available for purchase in Fall 2019, with an exact date to be revealed in the near future. 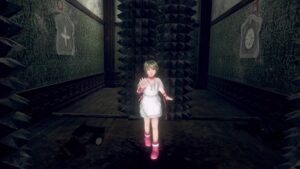 Furthermore, a list of VR hardware currently supported by Last Labyrinth, along with their respective distributing stores, has been added to the official homepage.

*The above list is valid as of June 2019, and may be subject to change in the future.

The full version will receive a multi-platform, worldwide release (download only) in Fall of 2019.

Stefanie Joosten, the voice and likeness of Quiet from Metal Gear Solid V: The Phantom Pain (2015) and international model, actress, voice-actress and singer, will be the voice of Katia, the mysterious girl that players work together with.

Company Name: Amata K.K.
Representative: Hiromichi Takahashi, Company President and Representative Director
Address: Sato Building 5F, Kita-Shinjuku 1-5-2, Shinjuku-ku, Tokyo, 169-0074, JAPAN
Established: 25th June 2008
Business: Game Business & others
Official Website: https://amata.co.jp/en/
About Amata K.K.: Founded in Tokyo in 2008, Amata K.K. has helped develop smartphone titles for a wide variety of world-renowned Japanese game companies over the years. With many staff having over 20 years of game industry experience, Amata has become a trusted one-stop shop for planning, developing and operating games across a variety of platforms. While keeping the focus on game development, Amata has also begun to expand into VR, video, media and other forms of entertainment.